What's wrong with my TomTom unit

I paid about £127.44 (excluding V.A.T.) for it from Ebuyer whereas what I got without lifetime maps or traffic could have cost more like £60. What followed were three main problems each wasting vast amounts of my time until I decide not to continue seeing as any time it might just save me driving had already been dwarfed by dealing with all of this.

It was supposedly with lifetime maps except not made clear that there were hoops to jump though and by the time I realised this it was too late. Luckily one of the TomTom people said they would still honour it. Except they didn't and the next person I spoke to was less helpful. Incident: 121028-000460, Incident: 121207-001558.

When it was very new traffic worked. Then it became intermittent. The relevant screen would show the IMEI and SIM ID coming and going. I should also say between Cambridge and London I have mostly excellent mobile coverage. But that's not relevant when the unit loses its own hardware. Incident: 130104-002689.

I could not get a written statement I needed to give to Ebuyer for a refund/repair.

See https://en.discussions.tomtom.com/map-quality-75/it-thinks-i-live-sawston-263111 that shows it did get partially fixed at some point.

What brought the whole miserable experience up again in June '15 was me saying to a friend how poor online maps are compared to traditional ones and OpenStreetmap. I then checked whether TomTom maps had Emmanual Road, Cambridge as a path across the supposedly combined Christ's Pieces and New Square as Google and Bing do. In this respect TomTom gets it right but I also checked a route to somewhere in that area Orchard Street and found TomTom still think it's in Sawston. 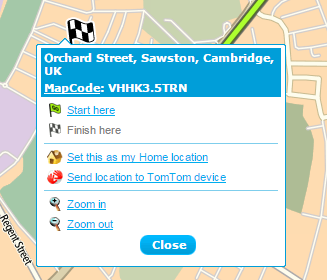 Does anybody actually pay for their maps ?

What I'd like, given the trouble I have gone to is for TomTom to replace its faulty hardware and provide the lifetime maps I paid for. Alternatively take the unit back and give me a refund. If they do I'll write here accordingly. Otherwise you can take it they didn't.

I can't say I recommend anybody purchase TomTom products unless you want flaky hardware, software, mapping, wasting hours with support that don't know what they're doing and not getting what you paid for.

back to my main page